How to Jumpstart Your User Acquisition With Admetrics - Part II

Let's start with a quick summary from the previous post:

So how can we manage and optimize ROAS for the users that we acquire? There are three main levers we can operate:

For many advertisers, focusing on one channel will deliver the best results, while for large advertisers a meta-optimization arises to saturate multiple channels adequately. We focus on the creative and targeting.

We can distinguish between two phases of user acquisition:

Historically, simple metrics like click rates and install rates were used to optimize for initial acquisition. Unfortunately, they are quite hackable, ripe for abuse, and often not correlated with long-term ROAS, therefore we focus on the early retention and monetization, measured with short-term ROAS.

So we continue to put the user first, and start with splitting our cohorts by dimensions, thereby creating cohort segments that can be compared. Examples of such dimensions are:

For instance, within a particular campaign, we can compare the performance of different targetting settings. For each cohort, we split users according to which targeting they converted from, we call these segments of the cohort. There are two main questions to answer:

To optimize our campaigns, we want to allocate budget from the worse to the better performing segments. This means that the dimensions we pick to segment need to be actionable.

Let's have a look at some real, anonymized data.

Explanations are in order: Charted is the 7-day ROAS for five consecutive weekly cohorts (the weeks of April 2019) for four Facebook ad sets (targeting settings) that happened to be running for a particular campaign Mandarin duck.

Recall from our previous blog post that this early ROAS by segment is assumed to be strongly correlated with the long-term performance of cohort segments, and used as a proxy. The question we are trying to answer is which targeting settings are particularly effective and acquiring profitable uses, and how the dynamic of each ad sets performance evolves over time.

One ad set Maximiliana (orange) consistently performs at around 20% ROAS. Some weekly variation in cohort performance is of course to be expected, and by squinting we see that this ad set’s performance variation is roughly within the same range (same width) as its credible interval.

Charting only Maximiliana, and adding cohort size as an additional metric confirms this is a relatively stable, albeit mediocre performing ad set. So if we were happy with this ad set at the beginning of April (we may have business reasons to target this segment despite non-stellar performance), we have no reason to change our opinion by the end of April: 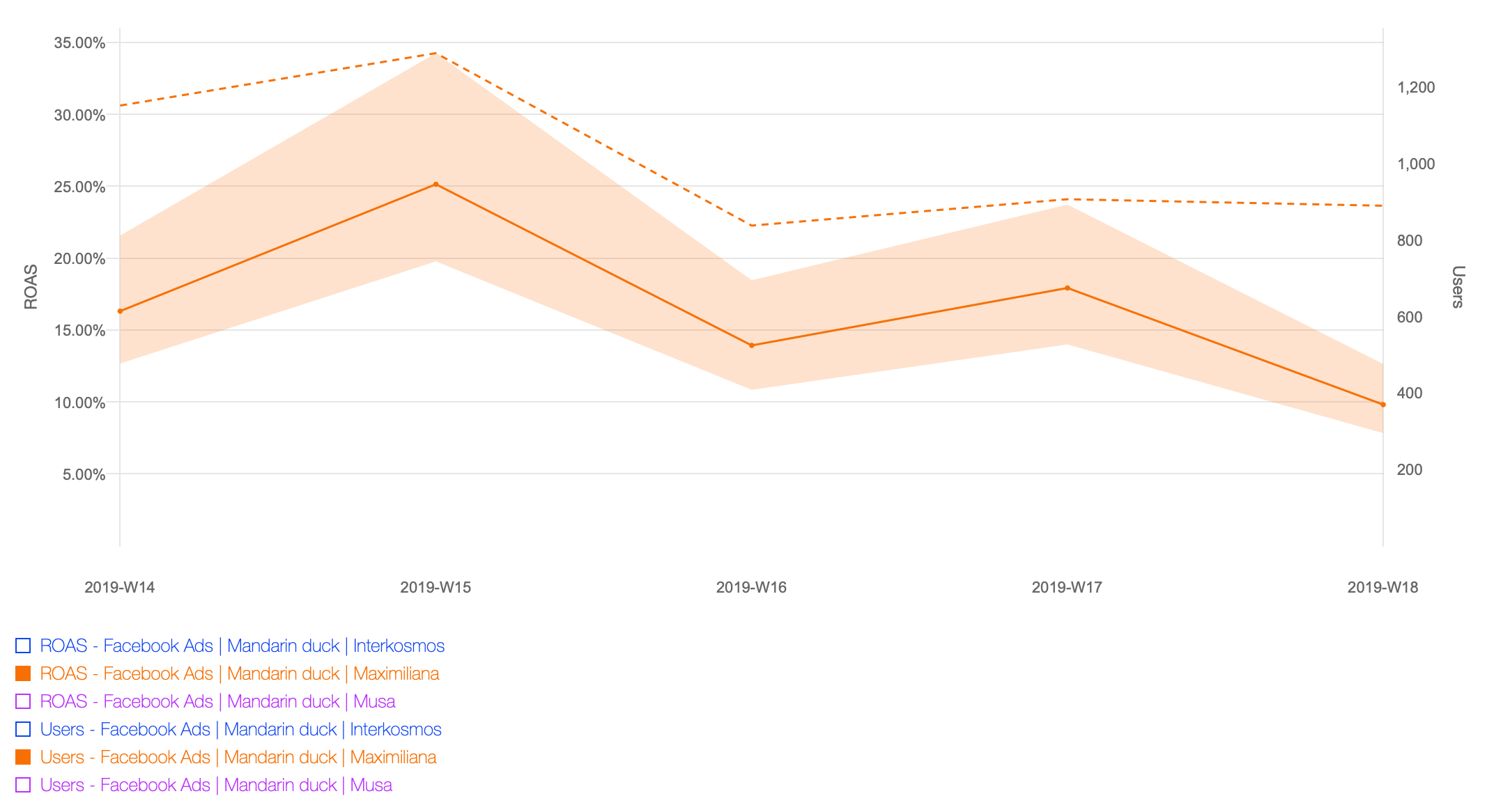 The other two ad sets however have strong performance trends over this period:

Ad set Musa performed well at the beginning of the month (50% ROAS), dropping to Maximiliana performance levels of 20% ROAS. By contrast, Interkosmos consistently improved its performance throughout the month, moving from 20% to 30% to three consecutive weeks of around 40% ROAS.

Most unfortunately, the number of users acquired via Interkosmos went down in weeks three and four, until spend was increased in the fifth week. This smaller sample size explains the widening of its 95% credible interval over time. Even so, for the three final weeks the entire credible interval lies above the deteriorating Musa and consistently mediocre Maximiliana: it performs twice as well!

We would be well advised to increase budget allocation towards Interkosmos, at the expense of the two others. While such an increase in spend on a targeting setting may increase the cost per acquisition, the huge performance margin over the others will act as a buffer on such (possible but not automatic) increases in acquisition cost.

For illustration, we end this example with a chart that plots the CPI: It reveals that Interkosmos is indeed already pricier compared to its competitor, yet tapping into this “premium” segment is the right choice due to its vastly superior revenue generated. By comparing these two ad sets over the entire month, we have a more concise picture showing lifts including credible intervals for the difference in performance:

ROAS is the gold standard of bottom line financial metrics. To understand how (and maybe why) certain segments perform better than others, we can dig deeper by comparing additional metrics, which focus on constituent parts of ROAS. Here are some examples:

As alluded to in this blog about exploratory experimentation, performing an exhaustive analysis by comparing all these possible combinations is quite the chore. Our current work in Newton is focused on implementing augmented analytics, towards automatically spotting opportunities and pro-actively making recommendations.